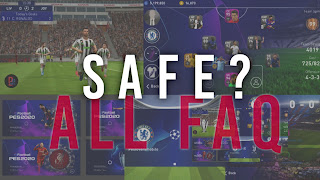 This is very important topic. So I recommend you to read all questions serial wise to understand clearly.

What is a Patch?

Patch is a edited customised game file, replaced by original one.

Well, You know Pes 21 Mobile is a big game around 1.5 gb of size. There is an apk file with 34 mb and around 1.4 gb of data file separated by two obb files. So generally whole game files include menu, teams, logos, kits etc are stored the 2nd obb file(1.20 gb). So by extracting this file and customising those, we make a patch obb file. Now you just have to replace it with original one.

Do you need to root your phone to use patch ?

No, you don’t need to root. But if your your phone is rooted, you will get a little advantage, that is, instead of downloading 1.20 gb patch obb, you can download a little patch file within 100 mb to use. As most of us not rooted, currently not sharing anything about it.

Will my game profile data will be reset and starts from new after installing a Patch ?

Good question! Read carefully. If you read my previous answers, you knew that after installing, Pes 21 Mobile have a apk file with 34 mb and game files as 2 obb in your Android/obb/jp.konami.pesam folder. But when you open the game and register your profile, you stored some data in your internal storage and Konami server. This profile data doesnot stored into those obb files or apk. They stored in Android/data/jp.konami.pesam folder. You don’t have permission to view your game profile data there but they exist. So if you replace the obb file with patch obb, it doesnot impact your profile data. It remains same until you delete the profile data or uninstall the game.

Will I get game update, when I am using a patch ?

Yes, definitely. Patch is just a overlay of original kits. It’s a offline file. The game runs totally on server. So you will get all updates.

Will I have to download patch again after updating my game ?

After updating the game, it’s version gets changed, konami may add new things into your obb files with that update and the patch Obb gets replaced by the original one again. So you must have to download a new patch for the version, and install it in same way. To get new patch update, make sure you have followed this blog, PLM facebook page and youtube channel.

If you heard somewhere that patch is not safe, Konami bans account by using patch, then it’s just a panic. Patch is 99.9% safe. Why not 100? Because Konmi wrote in their terms & condition that game file should not be edited. But they don’t care about it. Because they want to promote their game for business purpose and more users will enjoy playing the game, more Konami will be succeed. As you know Konami has to pay money to their licenced partner clubs. But actually they want to get all teams licenced. But it’s not possible, you know why. So if any third party makes any customisation in their game, Konami will not be the culprit. They are in safe side, as they did not do it officially. If you play Pes 20 console/pc version and use patch there, you may know some of those patches made by Konami staff itself and shares it by hiding. Most funny thing is, in Mobile version, Konami cannot detect patch by server. If you are using any customised kits in patch, it’s not visible to opponent in online match if he is using original game. You can only see that customised kit because the patch is just a overlay and that team kits and logo is customised over another original team. So the server detects the original one. But you are seeing different as your game file is edited in your internal storage.
There is no report of ban till now for past 3 years since Pes 17 patch was released. If someone’s account got banned, that’s for other reason for sure. There is no proofs or email for banning account with patch.

So that’s all of your queries about patch. If you have more questions about it, don’t hesitate to ask in the comment below. I will definitely update. Make sure you are following this blog by email. You will find a subscription tab below and don’t forget to follow on facebook as well. Thank you. New patches are coming soon.