Pro Evolution Soccer is a football simulation game by Konami. It’s available in all major platforms like ps4, xbox, pc, android, ios. Koanmi lauched Pes for mobile devices from 2017 with new innovation. Before in 2012 Konami made Pes for mobile devices but those were not that great. Konami improves Pes day by day and now even for mobile users. Pes 20 Mobile android/ios is a complete package. Now EA sports is being lag in their popular Fifa game. Konami also bought 3 new license of clubs. They are Juventus, Manchester United, and Bayern Munchen adding with their previous premium partner Barcelona. Also Konami is adding new Legends every week to their game.
Now, one of the most interesting thing of this game is Patch. Patch is nothing but a edited game file. Konami don’t have all club’slicense officially. But using patch, you will get all original lecensed. Though patch is made by third party but Konami is involved in it indirectly. But can’t do it officially. Coming to ban, the clear answer is Konami never ban account by using patch. In last three years since Pes 17 launched, people are using patch and there are no any issue or any proof of account banning by using patch. Konami wanted to promote their game. If users are happy with patch made by third party, that is not any problem of Konami. 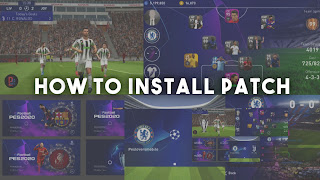 Pes patch is being popular day by day. Not only for pc users also for mobile users. Patchmakers around the world designing great patches with original kits, stunning menu graphics and lot more. QT patch is one othe best patch maker among them. Thanks to every patch maker for working with Pes mobile and promoting this beautiful game.

Download Zarchiver app or any other zip extractor app from playstore.

Open Zarchiver app and go to that folder where you have downloaded the patch. Now tap on it and click extract here. You can extract into any other folder also. Make sure you have 1.50 gb free storage before extracting. After successfully extraction, you will get a new folder. Now you can safely delete that zip file to save your storage. Next open that new forder and you will get a 1.26 gb patch file. Just take it as it is.

In your internal storage, go to Android/obb/jp.konami.pesam folder. You will see 2 obb files of pes mobile there. First one is around 400 mb(Main obb) and second one is around 1. 26 gb(official patch obb) file. Delete the 2nd obb file(1.26 gb official patch  obb) or you can backup this file to other folder if want to re use the original one later.

Now just cut that 1.26 gb modified patch obb file from that folder you have extracted and paste it into Android/obb/jp.konami.pesam folder.
Now just watch the video tutorial below to clear everything.
👉  Is patch safe? Could Pes Patch ban you account? (Patch faq) : Click here
OBB INSTALLATION GUIDE VIDEO
Done ! Enjoy !

👉 NOTE : As Cpk patch is not supported after Pes 21 Mobile update, we don’t know how to place obb patch file in ios without root. It’s possible by applying jailbreak in ios, which is complicated. We will bring tutorial for it soon.